A crazy thing happened on the way to making my next film.

About four years ago, in the midst of finishing production on my latest feature film Displacement, I had this nutty idea to develop a book series based on my short film Passing Darkness. My partners on that project, Debra & Gerald Hopkins and I, had actually been developing longer-form ideas inspired by that story for nearly ten years; I had written a feature-length screenplay, then we developed a TV series and I wrote the pilot script, after which we started developing a web series… all the while the world we were creating continued to grow. 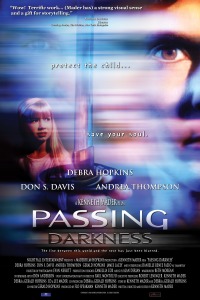 At the same time, the film and television industry was changing, and it had become increasingly difficult to get original projects set up at the level this needed to be without an established pedigree. It was a very ambitious franchise idea, that would require a huge financial commitment by a studio or network to do it properly. We did not possess said pedigree ourselves to make that happen, and the few showrunners and talent that I knew who could help grease those wheels were locked in to other projects at the time and unable to jump aboard ours.

My manager did get us some pitch meetings for the TV series at a couple of major studios, which went well, but without that pedigree, or an existing audience from “pre-existing material” (book series, comic, graphic novel, etc.) we could not compete with other IP (Intellectual Property) that was being adapted for the big and small screen.

It turned out this was not a dilemma exclusive to us, as other writer friends of mine were having similar experiences. Many of them decided to try to circumvent the problem by adapting their screenplays into books, thus creating the IP the industry was looking for.

Sounded like a great idea to me. There was certainly enough material in everything we had developed to adapt into a novel. And for about five minutes I thought I would tackle that task myself. I had actually begun adapting a couple of my other scripts by that point, and writing narrative fiction had been an enjoyable and rather freeing process from writing in the somewhat rigid screenplay format.

Then reality reared it’s head. I looked at everything on my plate, with finishing and releasing Displacement filling most of it, and realized that if I didn’t want this to take another ten years, I needed help.

So I reached out to my friend and colleague Julie Kimbrell Ishaya, who writes under the pen name of J.K. Ishaya. We had successfully collaborated in the past on a screenplay together and the process went quite well. Plus she had already published two novels in a similar genre, and was familiar with the project, the two of us having met through the sound designer on Passing Darkness. So I called her up and proposed a collaboration.

But not just for one novel.

In looking at all the material we had developed over the past many years, and the world we created, I believed there was enough material for an entire series of perhaps 3-4 books, maybe more. It was a vast universe we could play in that was ripe for novelization across multiple volumes. A paranormal sci-fi fantasy adventure that could be our own epic tome, in terms of world-building, characters, themes, and a continuing multi-book series. Thankfully Julie agreed, and in March of 2015, we hatched a plan to create The Arcadia Chronicles.

It is the story of Elaine Ways, a young mother and competitive martial artist, who has to battle dark forces to save her child from an evil that threatens not just their lives, but her sanity… on a journey to becoming a powerful warrior named Arcadia who protects children’s souls in the afterlife.

It took over two years to complete the first book, Afterlife. Based in large part on the feature screenplay I had written nearly a decade earlier, which itself was an extrapolation of the short film from back in 2005, and writing when time allowed between survival jobs and life interruptions, the story evolved into a 101,376-word, 344-page manuscript that begins the journey of Elaine Ways and her alter ego Arcadia. An epic fantasy that we think will appeal to fans of ghost stories, monsters, science fiction and the paranormal, as well as empowered yet vulnerable female heroes in a dark dystopian world.

We began submitting the manuscript to publishers last year, and after many months of waiting (and no less than a couple rejections), on January 9th we received an exciting offer from Zimbell House Publishing that will see the book released not just in e-book form, but also as a trade paperback, as well as hardcover print edition. Available online and in bookstores around the world. With professional editing and cover design. Reviews and Book Clubs. The Full Monte.

Having entered into another month of discussions and negotiations, the deal is now done. Last week, together with my co-author Julie, I signed my first publishing deal, and am setting off on this new adventure. The next step in my creative evolution. A new chapter, if you will.

It feels pretty surreal. I’m not sure the reality of it has hit me yet. Probably won’t until I have an actual book in my hands that I can bang on the desk and place on a bookshelf. Though I have to admit, “published author” sure has a nice ring to it. And frankly, if nothing else happens with the property in terms of movies or a TV series, at the very least it will get out into the world in book form. In and of itself a pretty cool thing, and something I am extremely proud of.

All that said, publishing is a long process which will take approximately 12 months from signing to release, so the first book will be coming out around this time next year. During that time we will be working with our editor, graphic artists and layout folks, designing and fine-tuning the book, building our online author and book series platforms, getting the word out…

And starting work on Book Two.

Yes, the story is mapped out and we’ve begun the early work of developing the second as well as third books in the series. Writing begins in earnest this month as we begin the process of publishing Book One, with the goal of having the Book Two manuscript ready by the time of Book One’s release. Then we write Book Three while publishing Book Two. Fun times.

In addition to that I’m currently prepping to shoot my next movie this year (more on that soon), so it’s going to be a busy and exciting 2019 and beyond.

Join my email list to get more inside news as we move forward, along with early word on release dates and advance copies of the book.

What sci-fi/fantasy books have you read and are a fan of? Any particular authors you love? Leave them in the comments section below.

To see Passing Darkness you can watch it here.

To watch Displacement with Bonus Features including Extended and Deleted Scenes and Director’s Commentary, you can get the DVD here. To own just the movie it is available for download on iTunes. Or you can stream it on Amazon Prime here in the U.S. or across the pond in the UK here.

Kenneth Mader is an award-winning filmmaker, screenwriter, emerging author, and self-determined dreammaker. Much to the chagrin of his ex-wife, certain family members, and the “committee” in his head.

His award-winning feature film DISPLACEMENT was released theatrically in Spring 2017, was acquired by A+E Networks for broadcast on Lifetime, was curated by the Academy of Motion Picture Arts and Sciences for inclusion in their historical Margaret Herrick Library, and is now available on VOD and DVD. For more info click here.

He is the founder and operator of Maderfilm Productions, a full-service production company specializing in high-quality films and entertainment projects. He was named one of the “Top 100 Indie Filmmakers in the World” in the book by Action On Film’s Del Weston. He also runs Nightfall Studios, a boutique post-production facility, along with the actor services company PerfectReel specializing in high quality demo scenes and short films for actors.

He is available for consulting on scripts and film projects as well. Contact him here.

One thought on “My First Novel”